OLED Technology Shall Illuminate Your Future

I was invited as a speaker to the OLED (organic light emitting diode) technologies summit in Berlin, November 23-24. This was the first time that I had the opportunity to attend this type of venue, with top scientists discussing the very niche area of OLED technology. What I heard and discussed there was truly eye-opening. 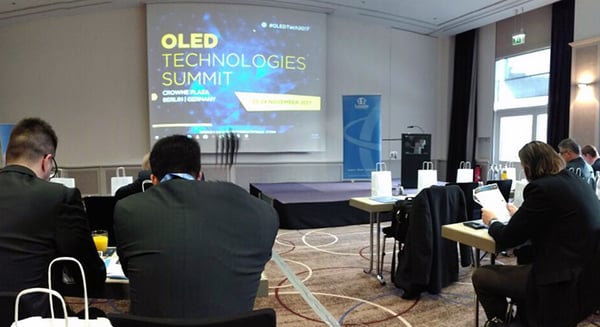 These were the main topics of the summit:

My presentation, titled “Measuring and Understanding VR Presence factors with OLED,” was in the third main topic category. In my presentation, I concentrated on three main items:

Motion blur is a phenomenon in displays that is typically caused by slow response times (rise/fall times). OLEDs are known for their fast response, but there are certain operating modes related to Virtual Reality that cause motion blur or ghosting artefacts. The operating mode is called low persistence or reduced motion blur.

One of the biggest obstacles for VR (virtual reality) success is the perceived resolution. The so-called screen door effect, which means that the user can detect the pixel matrix of the display, diminishes the user’s experience, which is often also referred to as “presence” in VR terminology. There are a couple of approaches which aim for better resolution, even perceived 20/20 vision, that matches the human visual perception. Both of them, foveated rendering and foveated display, follow the same basic principle: only the center of the human gaze is presented as full resolution. Other parts, called peripheral vision, are presented as low as 1/10th of a resolution. Foveated technologies, or “Bionic displays” as the Finnish VR company Varjo calls their own approach, require careful designing of optics, including eye tracking. We shall witness the first displays capable of eye tracking in the first half of 2018.

Many of the other presentations dealt with OLED technology at a very detailed level, such as display material technology and chemistry, production methodologies and processes. Based on those presentations, it is evident that OLED technology is far from mature; there are lots of things that need to be improved. This is good news from OptoFidelity’s point of view: quality inspection and calibration systems are needed, as well as instruments to re-calibrate refurbished devices with OLED displays.

It was really interesting to hear, from companies like Osram, PSA and OLEDWorks, how OLED technologies are applied in present and future products. For the majority of people, OLED means big 4K television sets or high-end smartphones. But that is not the whole story. OLED technology is used in display signage applications, such as car tail lights for example. Additionally, OLED illumination at home and at work will be an emerging business. The possibility to craft different three-dimensional shapes, control the color, create animations – those will be the main differentiators compared to ordinary illumination, including LED.

The future is always hard to predict. However, I tried to memorize the information from various presentations in order to summarize what might happen during the next three years:

The future of OLED promises very interesting things. We all know how 3D printing was hyped in the early 1990s, with the first open-source projects starting in 2005. Now, over 10 years later, 3D printing is a standard tool and method for many companies, including OptoFidelity. We will be seeing the same kind of future with displays. Printable electronics are not science fiction anymore. In the future, we shall have printers at our homes that are capable of printing Christmas cards with OLED illumination. Even today, increasing amount of large OLED panels are printed with inkjet technology.

In case you are interested to find out more about our display testing tools, please visit our solution pages for display quality inspection and testing: OptoFidelity™ GoldenEye.

Pioneering – values and creation of company culture in a growing company 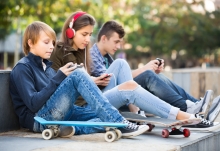 Video will be the key source of revenue in cellular networks*