OptoFidelity test teaser - If you are using a Bluetooth speaker, the audio may be ahead of the video in a distracting way

Kimmo, OptoFidelity’s expert at measuring video quality, tested the audio to video synchronization, or lip sync capability, of a Bluetooth speaker when streaming a YouTube video on a phone. The result was that the audio was ahead of the video by 120 ms, which interfered with the viewing experience and was clearly noticeable to the viewer.

For years, discussion forums have been buzzing over the lip sync problems of Bluetooth headphones, but according to a test by OptoFidelity, the same problems also plague wireless speakers that represent late 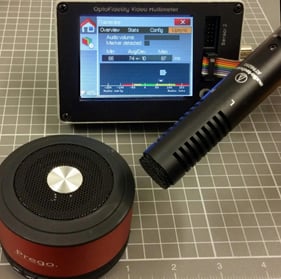 The test measured the playback of a YouTube video on an LG G3 phone connected to a Prego Bluetooth speaker. The test found that the audio was ahead of the video by 120 milliseconds, which is a difference in the audio to video synchronization that clearly interferes with the viewing and listening experience. In this respect, a Bluetooth speaker differs substantially from the phone’s own speaker or headphone jack. The phone’s own speaker played the audio with a lag of +40 milliseconds, and the headphone jack with lag of +60 milliseconds.

More detailed measurements of the performance of a Bluetooth speaker could show whether the difference in playback can be attributed more to the phone or the speaker. To consumers, it does not always matter whether the difference is due to the phone or the speaker. It is clear, however, that the increasing use of wireless speakers in gaming and watching videos does not always provide a good user experience.

The test measurements were carried out using an OptoFidelity Video Multimeter measurement device, which makes it possible to measure the quality of a smartphone, tablet or any other multimedia device directly from a screen. One of the options of the measurement device is measuring the lip sync property of a device.